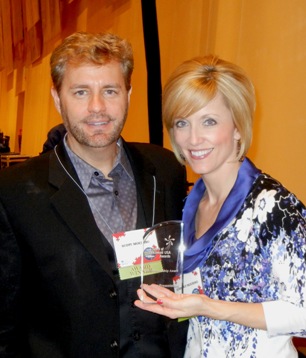 The MPG team has been honored by the Cincinnati USA Convention and Visitors Bureau with a Spirit of Cincinnati Partnership Award for its work on a multi-media live spectacular that was presented as part of the closing ceremonies at the 2010 World Choir Games in Shaoxing, China.

Titled “The American Dream,” the show introduced singers from around the world to the city of Cincinnati, which will host the World Choir Games in 2012.

Calling the show “one of the most powerful tools we had to demonstrate the power of American music and Cincinnati USA,” the convention and visitor’s bureau gave MPG the Partnership Award at its 2011 annual meeting.

“MPG created a truly memorable show, and let the world know that Cincinnati USA will be ready to take center stage in 2012,” said members of the selection committee.

Written, produced, orchestrated, cast and costumed entirely by MPG, “The American Dream” featured Broadway caliber performers with video transitions that followed a young boy from China and a young girl from Cincinnati as they chatted via computer about their plans for the 2012 games.